Whether installed in your private cloud or externally hosted, Cloud Compiling delivers virtual compiling technology with all of the benefits of cloud computing. For more information, please visit
www.cloudcompiling.com
or call 877-245-4322.

Cloud Compiling reduces costs with no change to existing compilers

A Fortune 100 conglomerate operating in more than 60 countries, with tens of thousands of employees and products, initiated a Six Sigma push throughout the organization.

The North American data center looked at ways to improve its processes per the initiative. Not much had changed over the years in its mainframe environment; the company had long paid high monthly license costs for mainframes running COBOL licenses.

One IBM License per Language

For its Six Sigma effort, the data center evaluated Cloud Compiling, a virtual compiling technology that reduces the number of licenses required. Without replacing existing compilers, the solution virtually locates compiler licenses on just one server, but extends licensing to all the others.

In turn, companies reduce the number of required licenses and the associated recurring costs. In addition to providing a simple solution, Cloud Compiling made trying the technology risk-free. Implementation required no data migration, no IPLs, no supervisor calls, no assemblies, and most importantly, no cash outlay.

With a simple savings share plan, when the data center reduces its monthly license costs, the vendor shares in those savings.

Up and Running Under a Day

Implementation is as simple as reading an email. The data center installed the Cloud Compiling solution on one server. Then, Cloud technology invisibly extends the use of one license per common language to the other three mainframes. In less than a day, they completed the installation and no longer needed licenses on the three other machines.

Moreover, the solution does not require the company to move licenses physically from the three boxes to one. Without data migration requirements, programmers did not even notice a change.

“We installed the Cloud Compiling technology in just a few hours. We’re still using the same compilers we’ve always used. The only change is, we save well over $400,000 a year.”
– Manager, MVS Systems, Fortune 100 company

The company then reduced its billing by three total common language licenses – which immediately went into effect. The data center maximizes its license savings by virtually locating all compiler licenses on the server with the lowest MSU (million service units) rating. The “cloud” enables virtual compiling on machines with the higher MSUs. 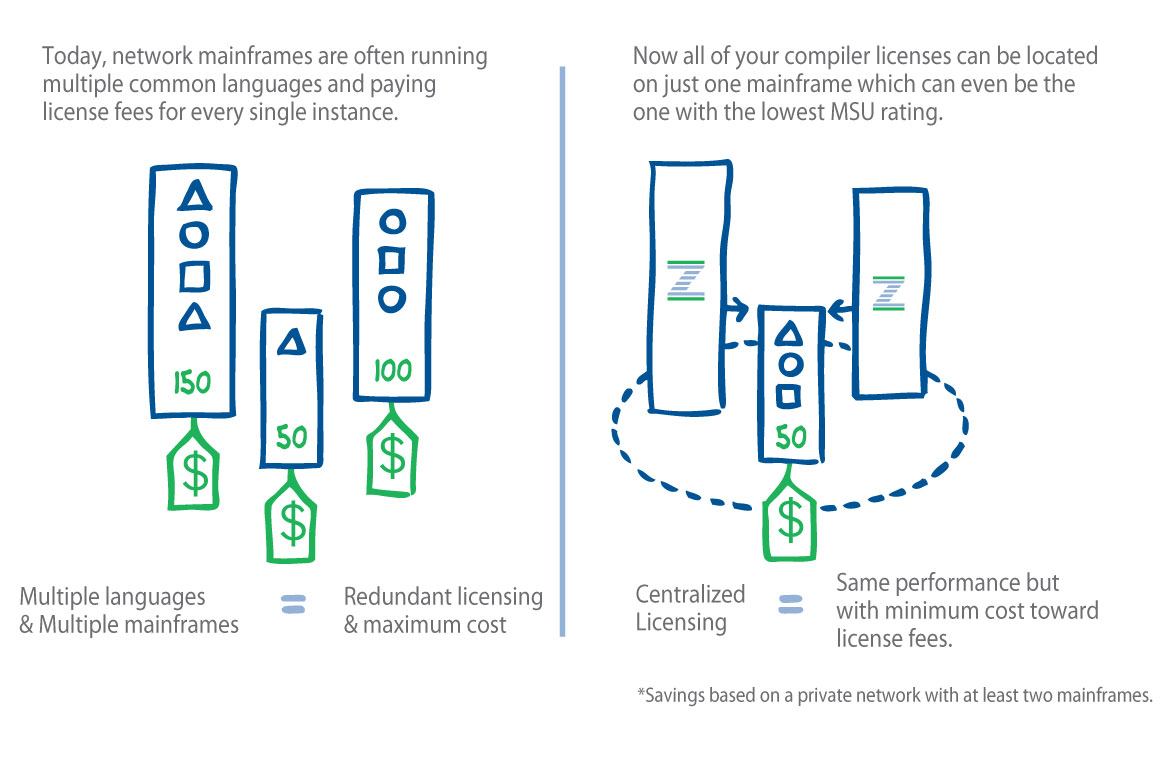 By centralizing licenses from four mainframes to one, the data center team streamlines management of licenses by 75 percent. When IBM makes changes or updates licenses, the company only needs to install new versions on a single box, which also ensures that all compiles enterprise-wide use the same options and the latest PTFs.

If the company adds more mainframes, it also easily scales the Cloud Compiling technology to the new machine and continues to enjoy the cost- and time-savings of locating licenses on just one box.

“It allows us to have better control when making changes,” the data manager said. “If we – ip the switch from one PL/I license to another, we won’t have compiles failing. We can see more easily which groups are getting their compiles through to ensure a smooth transition – so we have greater control over the process.”

With Cloud Compiling, the company also benefits from built-in redundancies. If they encounter a problem with the server or network, compilers will automatically try other avenues to compile.

More recently, the global company added the PL/I language for its European offices, and easily brings the new common language into its licensing environment with the Cloud Compiling technology.

Across both COBOL and PL/I, they save three licenses on each language, for a total of six licenses. In total, the company reduces its monthly licensing costs by consolidating them all to a single license hosted in our secure cloud. The global company pockets those savings even after Cloud Compiling’s savings share plan.

“We installed the Cloud Compiling technology in just a few hours. We’re still using the same compilers we’ve always used. The only change is, we save well over $400,000 a year.”